Previous post HERE covers Thursday and Friday at the convention.

Saturday Lena and I got another late start, skipped breakfast and instead had wonderful early-lunch burritos at Viva Mexico. I should’ve taken pictures! Here’s a picture of me & Lena in the dealer room, photo courtesy of Todd Chicoine.

After yet another run-through of the vending areas, we attended the Thomas Ligotti panel. This featured Alex Houston (moderator), Michael Calia, Jon Padgett, Matthew Bartlett and Michael Cisco. 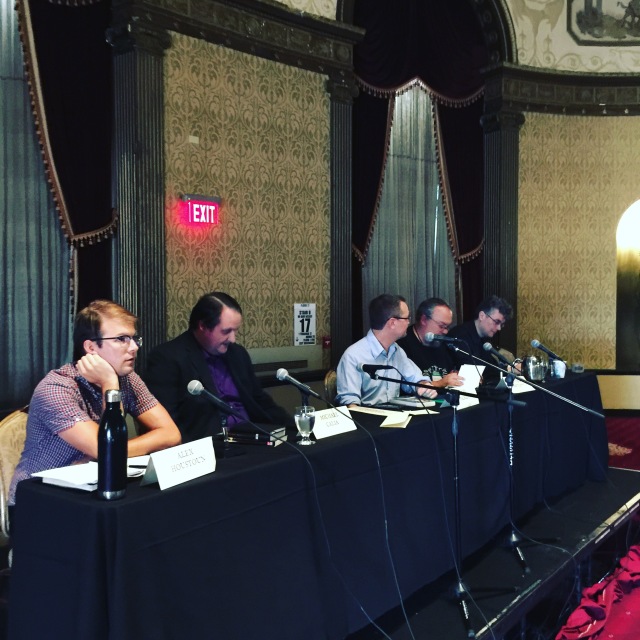 Jon Padgett offered quite a few special insights and anecdotes from his long friendship with Ligotti. We sat toward the back and couldn’t hear a couple of the panelists very well, so big thanks to Scott Desmarais for recording video, available below!

Immediately after this at 6 PM, just across the hall, was the Looming Low reading. Because we came straight from the other panel, I had to forego my usual fortification of a drink or two just before doing a reading. The event was very well attended, and the room was full, with an especially rowdy contingent of Canadians in back (not visible here).

The picture above is co-editor Justin Steele introducing the program. The audience extended further back, behind what’s shown in this photo.

I read the beginning from “The Sound of Black Dissects the Sun.” Here’s a photo by Jake Marley: 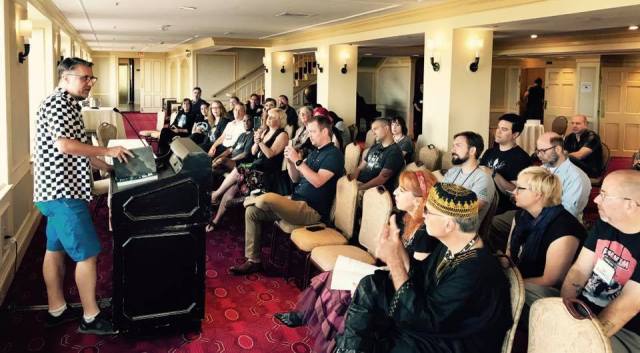 I kind of like this one better, though, as it fits the tone of the story. Photo by Michael Wehunt, with my special, secret “Sound of Black” filter applied. 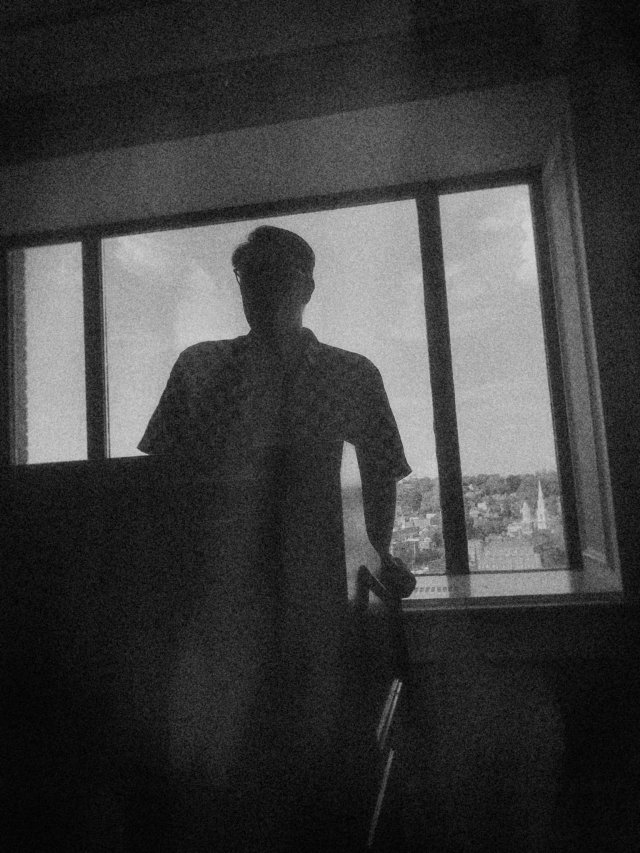 And here a video of my reading, about 12 minutes worth:

Other readers included Livia Llewellyn, Anya Martin, Brooke Warra, and Michael Wehunt. It was Brooke’s first reading and she did a great job, as did all the others. All my photos had a lot of background glare, so I’ll just post one of Brooke, since a writer’s first reading is a big milestone:

In addition to those of us who read, there were a total of 12 contributors to the book in attendance! The crowd was not only large, but very enthusiastic. I signed more books than I’ve signed all in one place, anywhere, ever. I was also delighted to see how many people owned the hardcover.

Hardcover with art by Marcela Bolivar:

Nothing at all against the paperback — in fact, the art by Yves Tourigny is beautiful and every bit the equal of the hardcover art by Marcela Bolivar — but I love to see people picking up the special limited version despite the higher price. Both versions have the same content, of course, so you can’t go wrong either way. A surprising number of people seemed to have bought one of each.

The book appears to be one of the Horror/Weird Fiction events of the year, and I very much look forward to investigating all 26 stories. If you weren’t able to pick up a copy at the con but would like to have one, you can order direct from Dim Shores.

Speaking of books and Dim Shores, Sam set aside a few copies of certain out of print Dim Shores chapbooks, intending to sell them at the con, but one of the boxes didn’t arrive until Sunday, after almost everyone had gone. Because of this, a few copies of recent books (previously sold out) are available now via the Dim Shores online store. This includes my own AN IDEAL RETREAT. This hasn’t been for sale in quite a while, and won’t be again, so if you’re ever going to want one of these, grab it up while the store listing is still active.

Here are direct links to the various books available as of now:

Note, not all books published by Dim Shores are by people named Michael! Following is proof:

Please note, this last item is a special fundraiser, profits of which go to benefit Joe Pulver, and help offset his ongoing medical costs.

SO, after such events as described above, what more could a convention-goer want? Maybe it was time to call it an evening, shut things down early and retire to restful sleep?

One of the events that has characterized every hotel-based convention I’ve ever attended is the big Saturday night room party. At NecronomiCon in 2013, it was Laird Barron and John Langan’s room. In 2015, with Laird not in attendance, the party happened in John Langan and Paul Tremblay’s room. You might be thinking, “OK, so who did Langan share a room with this year?”

The answer is, John was unable to attend (and was much missed, and also gossiped-about, in his absence), so the torch has been passed to a new generation. The NecronomiCon 2017 room party of record was held in the room 638, shared by Justin Steel and Sam Cowan, co-editors of Looming Low.

There’s a new boss at NecronomiCon! 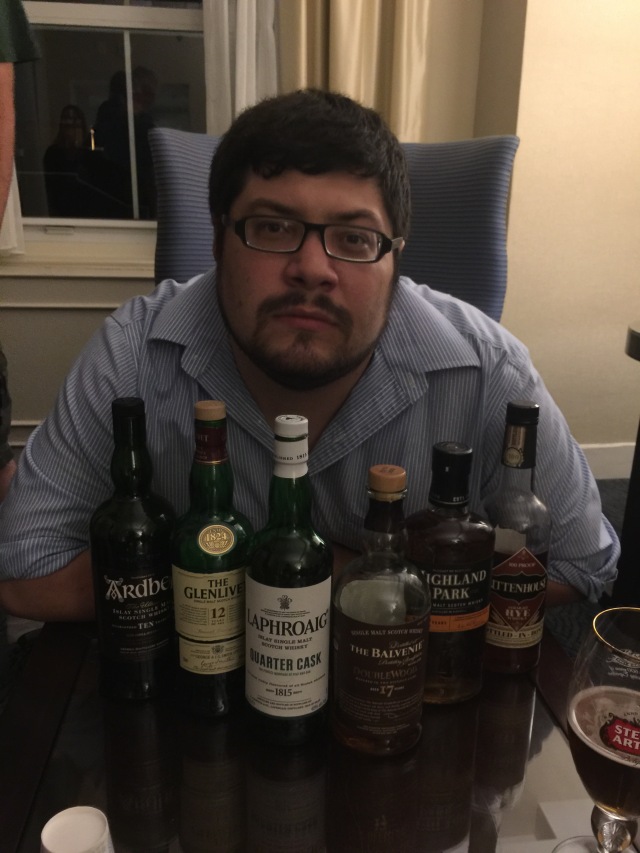 Justin Steele guarding the first deposits to the Iron Bank of Whiskey.

Here we have Lee Thomas, Katie Lang-Calia, Livia Llewellyn, Michael Calia, Simon Strantzas and Nicholas Kaufmann. The photo is slightly blurry because the room was so hot and humid, my lens fogged up.

Here I am standing by the cool ventilation of the open window with Theresa DeLucci and her husband, mostly talking about how the new Twin Peaks is the best thing ever, and anybody who doesn’t get it is just sad and wrong.

And here’s another angle of the cool, open window, with Paul Tremblay, Michael Calia, Me, Teresa, her husband Pritpaul, and Jake Wyckoff.

Somehow Lena and I managed to stick around until after 2:30 and there were lots of people still up and around when we left. The next day, Sam reported that he finally expelled the last stragglers at 4 AM. Room party successful!

I’ve never been good at falling right asleep when I get home (or at least to my hotel room), so I was up another hour or so, and had to set an alarm to wake me up after a short rest.

Sunday morning, the final morning of the convention, I had my earliest panel. Here’s somebody’s hand-drawn sign outside the room:

So it was, the Dreaded Surreal: Landscapes in Weird Fiction panel, with Eric Schaller (moderator), Craig L. Gidney, me, Jeffrey Thomas and Christopher Burke. Here, during introductions, Jeffrey Thomas shows off the novel I just mentioned. 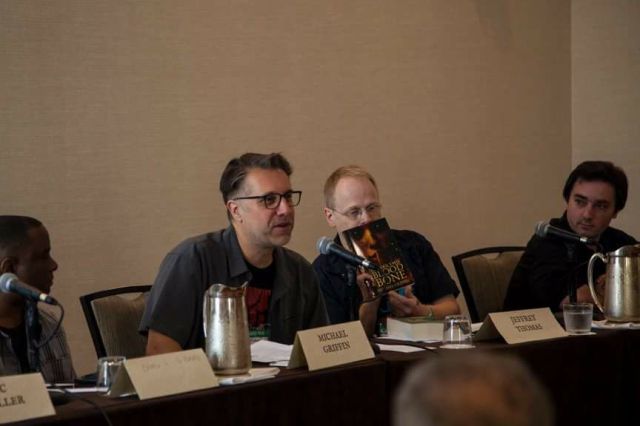 That’s a buddy, helping with the promotional boost!

The panel went well, with plenty of interesting discussion and questions and recommended reading to check out. Before we know it, though, the thing was over! Not just the panel, but the whole convention.

Lena and I had to leave immediately after the panel, so I had my suitcase with me at the table and headed outside without delay. Before we knew it, Lena and I were at the airport, then through security, and NecronomiCon 2017 was already in the rear-view mirror. The whole convention was a wonderful experience. Highlights included the Looming Low reading, the Dim Shores room party, accepting the Robert Bloch award for Joe Pulver, attending the Ligotti panel, and having a chance to meet a great many online friends in person for the first time.

The NecronomiCon was a great experience all around. I only wish it happened every year. My sincere thanks to Niels Hobbs and his crew of tireless volunteers for making this happen!