A quick outside link to an article by Peter Straub, bestselling author of Ghost Story and a couple of collaborations with Stephen King, discussing the matter of genre. If there’s one category of writer even more touchy about genre than science fiction people, it’s probably horror writers. 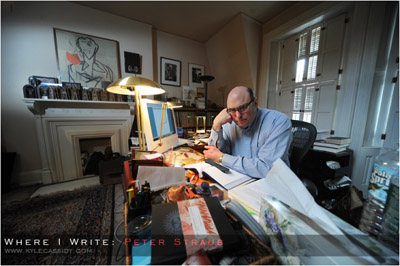 Just for beginners, let’s admit that literary fiction is a genre, too, shall we? Expectations guide its readers, that of respect for consensus reality and the poignancy of seemingly ordinary lives, of sensitive character-drawing and vivid scene-painting, of the reversals and conflicts characteristic of the several sub-genres of literary fiction.

Link to the full article.

I’ve touched on this subject several times already in a blog that hasn’t yet seen two dozen posts, and that’s because I’ve gone through three periods of writing in my life, each time in a different style. As a teen I wrote horror/supernatural stories influenced by Twilight Zone (both the TV show and the magazine), somewhere halfway between the short fiction of Harlan Ellison and Stephen King. In my twenties I wrote more straightforward stuff meant to be “literary” but couldn’t stop myself from adding strange flourishes that might have been postmodernist or magical realist, or might now be called slipstream or “new weird.” Now I’m writing science fiction, but with a great emphasis on people, relationships, internal thoughts or feelings, as compared to “spaceships, aliens and planets” kind of science fiction.

Having come out the other side of these transformations myself, I realize: The same kinds of ideas and surprises have always interested me, and in a sense I’ve always written about the same things. The settings and the clothing are different, and that’s the biggest thing “genre” really is. How is everything dressed up?

I suspect most writers wish the boundaries of any given genre were more flexible.